As many of you have guessed, I find pathways irresistible. It never bothers more if they lead nowhere or force me off my journey. Instead I greedily soak up everything along the path, especially if the “everything” captures my imagination or reminds me of a favored story. Neurons failing to fire for overdue deadlines or timed arrivals suddenly launch into hypermode as I internally spin connections known only to me and (perhaps) other dreamers. Whether it translates into anything but pleasure remains an open question but I no longer feel guilt. An artist friend described something similar by noting she viewed life as vivid colors and definable shapes (all pushing at her brain to create things). Fortunately her great talents allow her to produce a great product out of her ruminations. In my case they most often feed the endless trivia popping out of my during both opportune and inopportune moments.

Anyway, my  August foray to UCSF – featured in an earlier post – produced several vignettes from my thrashing through the campus. Below are a couple more, which I hope to exhibit in slideshows. However, I can only figure out how to place them in one slideshow. Go figure.

A beautiful 2008 exhibit championing communication captured me on all counts. A beautiful pathway draped with beautiful plants and stunning canopy featured signs written in the world’s languages. Many beautifully calligraphed statements went beyond hello to evoke real thought about the nature of communication. Points if you can translate them. More points if you can read some of them (in time I will get to better know my camera).

I obsessively snapped the pathways leading to closed doors or unseen places. Some pictured active work sites hidden beyond locked doors. Others remained as ghosts from UCSF’s path (both due to the passage of time or movement of jobs to Misson Bay site). All reminded me of the endless mysteries I gobble up either in books or television (always my endless need for justice). Some just downright frightened me (reminding me of the poverty-strickenareas in which I have worked). Hopefully you will see some of those things (or find your own source of satisfaction).

Finally (for tonight) I wandered into UCSF’s beautiful art garden, which resides near the School of Nursing. It proudly displayed both world-class art – include the cheeky sculptures featured in the slideshow –  and heartfelt homages to fallen classmates and faculty (most appearing as beautiful trees now reach to the sky). Interspersed among all of it was great artwork from various eras and genres. Some championed the patients and providers, others seemed to celebrate the eccentricity associated with a life spent fighting both life and disease. Or maybe just the quirky spirit needed to survive school in a hilly wind tunnel. Either way I found both its charm and absurdity a welcome antidote to the stunning beauty associated with the hill views.

A must see exhibit in NYC of 19th century folk art. Check out the New York Times Review at http://mobile.nytimes.com/article?a=955549&f=29

However I would love to also see the fancy quilt and painted furniture.

Even better its all stored in 19th century row houses. 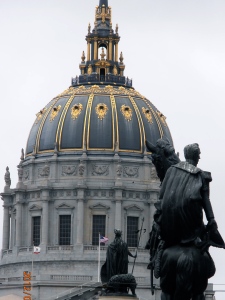 I work within shouting distance of San Francisco City Hall, which exists in a neighborhood most of us know as the ‘Loin (Tenderloin). The Tenderloin boasts both some of the oldest and newest building buildings in the City, a diverse and densely packed populace, and the real and imagined seats of federal, state, and local power.   Having attended Hastings and worked down there for years, 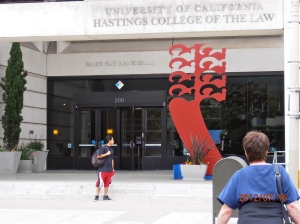 I have seen it swing from the most vibrant to the most desolate of places (sometimes in a single day as folks scurry home).

Tonight I can’t possibly do it justice so I will let some random photos speak to it. Know however you should come on down. You will find the best food (at the best prices), a dizzying amount of art (in museums and fairs), and street theater (both in and outside of City Hall).

Enjoy but remember I’m still learning both the software and photography. 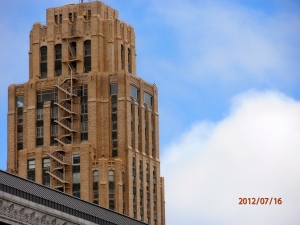 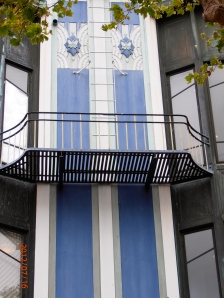 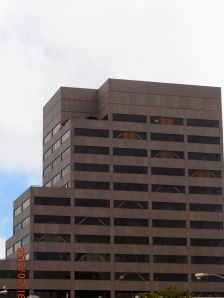 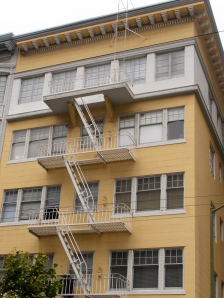 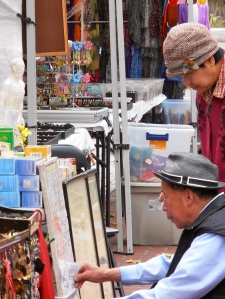 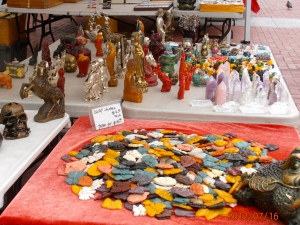 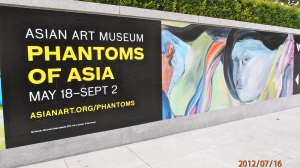 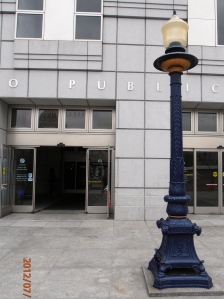 Our guardian (slave) has been out of commission so we jumped on the blog tonight to post a quirky and weird selection. We had to grab her camera phone to do it. A little harder to work than the TV remote but thankfully we figured it out. 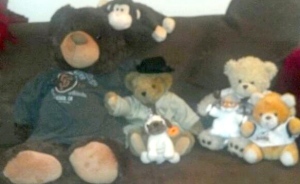 Oh, who are we? Tonight you can call us the bear chorus. We will introduce ourselves more fully in another posting. Truthfully we merit our own blog but we CSheila hasn’t finished negotiating with our agents. Hey, we saw what happened with Ted. It could be big time for us.

Here she tries to get artistic as she walks along the Embarcadero or sits by the water. We’ll take her word for it since fur and water don’t mix so well. Not to mention it would screw up our outfits. (One of our biggest demands in the negotiations is fresh clothes, except for Telly (he’s not giving up the hat and coat for anything.) 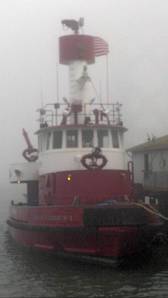 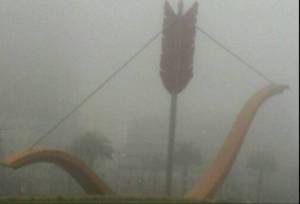 She loves grabbing stuff in the neighborhood including free stuff (shudder) she later “fixes up.” Sigh, given the amount of design shows we watch with her you think the stuff would look better. But deep down she’s a hippie. Anyway we still love her even if she can’t channel a gay man or a straight woman. See below for some quick hits (both found, given, or bought). 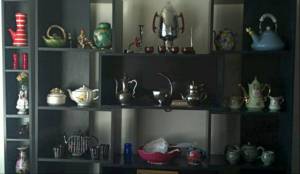 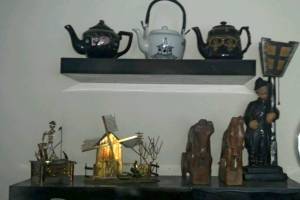 Other times she snaps the stuff you just get to see when you wander through SF. Mind you we also hit the streets but prefer clubbing. 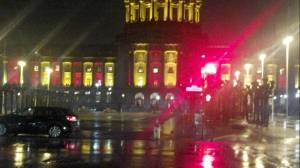 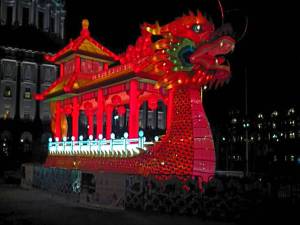 Sometimes she just grabs nature shots from parks or neighborhood. Warning she tried the artsy thing again. We want to encourage her to get out so haven’t sat down to give her tips. It makes her happy when she goes out. More importantly it frees up the remote for us. 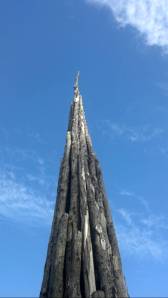 Finally she likes to hit museums and snap some pictures. You will see some stuff here from current DeYoung show by Gaultier. We still have not forgiven her after we found she look at some rent boy bear costing $175!!!! Of course she didn’t buy it. She wants similar action one of us will volunteer to put the ring through our nose. Most like Broom Hildie (the crazy – and proud of it — Viking Kitty). 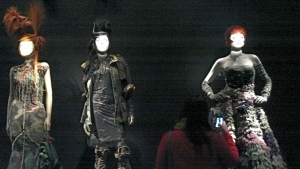 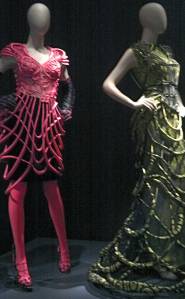 Other shots are from SFMOMA. She keeps trying to capture building shots — this time through glass. Worse she foolishly indulges her hot chocolate fetish. Sigh; we let it go since she always had one with her mom. 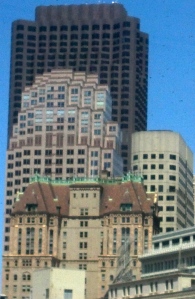 Our favorite shots, however, remain the ones she just finds walking in the neighborhood like the benches and gardens. 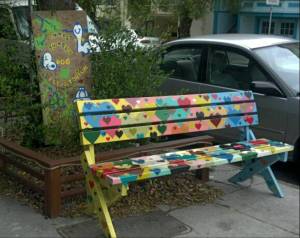 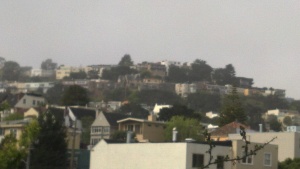 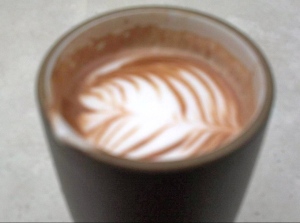